Liability in relation to an UK OFTO transaction agreement

According to the UK provisions, and this is somewhat unique to other European countries, the development of a wind farm contains the construction of DC or AC offshore substation platform(s), offshore and onshore export cables and an onshore substation. However, since the applicable UK regulations do not allow wind farm owners to control the transmission system at the same time, the wind farm owner is obliged to sell the Transmission Asset to an Offshore Transmission Owner (OFTO). This operation and the granting of the offshore transmission licences are administrated by the governmental Office for Gas and Electricity Markets (Ofgem) in Great Britain on basis of a competitive tender process.

Against this background the High Court of Justice decision in Gwynt y Môr OFTO plc v Gwynt y Môr Offshore Wind Farm Ltd [2020] EWHC 850 (Comm) examined the question of at which time and for which timeframe before Completion the liability for failures in the export cables between the Gwynt y Môr wind farm and the National Grid dating back to the manufacturing process passes on to the OFTO.

On 8 April 2020 Lord Justice Phillips found that the defendant was not liable for covering the costs of reinstating two defect subsea export cables. The defendant had sold the business of owning, maintaining and operating the electrical transmission link to the claimant. A sale and purchase agreement was agreed and signed on 11 February 2015 and the transaction (thereafter referred to as ‘Completion’) completed on 17 February 2015. Shortly after, the first cable failed on 2 March 2015, followed by the second defect cable on 25 September 2015. Relying on an indemnity clause in the sale and purchase agreement, the claimant claimed the costs for reinstating the two defect cables.

Since it was unchallenged by both parties that the cables failed due to a severe corrosion dating back to a failure in the manufacturing process, the question in dispute was whether the wording ‘prior to Completion’ in the indemnity clause meant any timeframe before Completion on 17 February 2015 (as substituted by the claimant) or if the wording only applies to the time between signing the sale and purchase agreement and the Completion (as argued by the defendant). 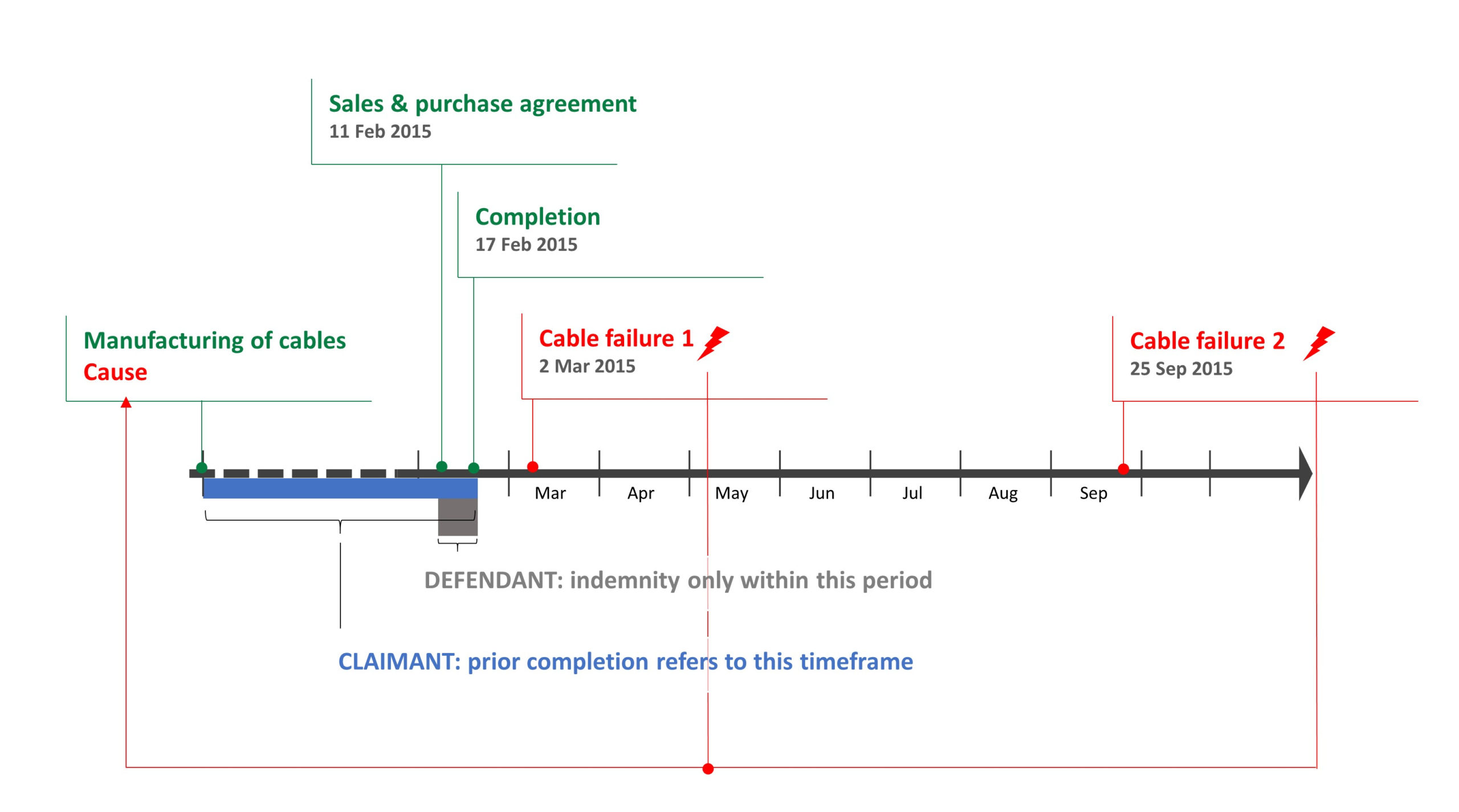 The High Court ruled in favour of the defendant, taking the wording and context of the agreement into consideration. The court interpreted the sales and purchase agreement as the date it comes into force, so that in conclusion the wording “if any of the Assets are destroyed […] prior to Completion” must refer to the timeframe beginning from the execution of this agreement. Whereas the wording “if any of the Assets have been destroyed […]” would have referred to a point in time beginning before the execution of the sales and purchase agreement. Reading this, one should put special focus on tenses and keep a close eye on specific wording of clauses.

The court further noted the systematic placing of the clause in dispute, stating that an insertion between a clause dealing with the signing of the agreement and a clause that regulates the Completion suggested that the indemnity clause was intended to refer to the timeframe in-between. It is important to keep in mind that many boilerplate contracts exclude headings out of the interpretation process. Thus, it is recommendable to check one’s contract in regard to such regulation.

The argumentation of the court was supported by the fact that the claimant gave a warranty for the absence of damages on the date of the signing of the agreement. More precisely: “[…] the existence of the Warranty is a powerful indication that the indemnity does not so extend.” The High Court found no reason as of why the defendant should be responsible for damages outside the Warranty prior to the agreement “and, indeed, the opposite is the obvious commercial likelihood”.

In this specific case, the agreement referred to timeframes before Completion through inconsistent wording, which lead to the parties disputing about the meaning of different provisions. Keeping this in mind, it can be not emphasized enough to do a quality check on consistent wording in the process of negotiation to make sure that any risk allocation mechanisms clearly cover the risks you want them to.